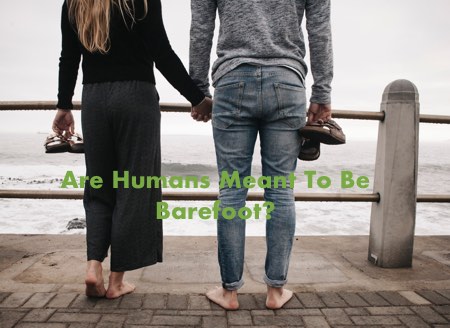 Are Humans Meant To Be Barefoot?

A fact of life we all have come to accept as the norm is that we have to wear clothing of some sort. This, of course, has to be appropriate to and will vary based on your location, culture and customs.

None more so than what we put on our feet. We have footwear available to us of every shape, form, function and size. However, have you ever stopped to ask the questions for a second –

Are humans meant to be barefoot? Humans are meant to be barefoot yes. What we wear on our feet should be a minimalist covering to protect them from the predominantly man-made surfaces we have created. Fortunately, evolution has equipped us correctly and given us perfect tools to do the job of getting around, walking and running.

We are indeed meant to be Barefoot.

This article will walk you through some of the amazing findings from my research into science and history. All of these will give you a lot more insight so you know more. Let me show you.

A Brief History Of Walking And Human Adaptations

With millions of years of evolution behind us, Homo Sapiens (Humans) as we are known have become Bipeds.

A biped is essentially a two-legged mammal that gets around on it two feet without relying on its forearms for propulsion and support.

This is true in the case of human beings. We evolved over millions of years so we could walk and run as we needed, to survive and thrive. We can safely deduce that barefoot walking was probably the primary form of human movement and migration. Barefoot running was an adaptation more for hunting down game for meat and escape and evasion of predators.

Here is an excerpt from Professor Dan Lieberman’s book The story of the human body.

Man alone has become a biped; and we can, I think, partly see how he has come to assume his erect attitude, which forms one of his most conspicuous characters. Man could not have attained his present dominant position in the world without the use of his hands, which are so admirably adapted to act in obedience to his will. … But the hands and arms could hardly have become perfect enough to have manufactured weapons, or to have hurled stones and spears with a true aim, as long as they were habitually used for locomotion and for supporting the whole weight of the body, or, as before remarked, so long as they were especially fitted for climbing trees.

… If it be an advantage to man to stand firmly on his feet and to have his hands and arms free, of which, from his pre-eminent success in the battle of life, there can be no doubt, then I can see no reason why it should not have been advantageous to the progenitors of man to have become more and more erect or bipedal.

They would thus have been better able to defend themselves with stones or clubs, to attack their prey, or otherwise to obtain food. The best built individuals would in the long run have succeeded best, and have survived in larger numbers.

We continued to evolve even further with our hips fully opened up and suitably adapted for walking and running.

The need to trek long distances in this age would have been key to being an effective hunter-gatherer. And as I said earlier, escape from a predator was also a top priority for early man.

The fastest of us like Usain Bolt can run up to 37 kilometres (23 Miles) per hour for about 10 seconds compared to a lion which can go twice as fast for about four mins.

However Dr Lieberman went on further to say:

However, there is plentiful evidence that by the time of H. erectus our ancestors had evolved exceptional abilities to run long distances at moderate speeds in hot conditions. The adaptations underlying these abilities helped transform the human body in crucial ways and explain why humans, even amateur athletes, are among the best long-distance runners in the mammalian world.

The Shoe Question: Yes Or No

The eternal question as to whether we are meant to wear shoes and what type we should wear will always be brought up. The answer is yes we are meant to be barefoot but as I said earlier can also wear minimalist shoes if we know what we are doing.

Walking and running completely barefoot will always be the ultimate expression of movement. It is how we were designed to function. Therefore it stands to reason that the more we add under our feet, the more there will be an effect on our movement patterns.

Research has shown that running in barefoot shoes will allow us to avoid heel striking. Barefoot running study: How humans ran comfortably and safely before the invention of shoes: Harvard 2010 says

Scientists have found that those who run barefoot, or in minimal footwear, tend to avoid “heel-striking,” and instead land on the ball of the foot or the middle of the foot. In so doing, these runners use the architecture of the foot and leg and some clever Newtonian physics to avoid hurtful and potentially damaging impacts, equivalent to two to three times body weight, that shod heel-strikers repeatedly experience.

How Shoes Affect The Way We Move

There are several ways this happens. Firstly if you get rid of your shoes, you will strengthen your feet without a doubt. You will then be able to lift heavier walk longer distances and run faster.

Your feet are covered with lots of sensors that give your body feedback called proprioceptors. They provide your body with feedback about your position and alignment. When we move with no shoes on they enable greater feel and don’t allow any muscle activation.

This leads us to change the way we stride. An overload of feedback from the feet can be a bit much for a beginner that is why we stress the need for taking it super slow in the beginning. I go into greater detail in my other post for barefoot beginners, go check it out here it has a lot of useful information.

If we have anything on the under our feet, it prevents us from getting this feedback. Once you have developed you light footed barefoot stride, you can move over to barefoot shoes. Remembering that the critical factor here is the lightest and thinnest option you can find to give your feet the most feedback.

It all becomes a cycle if you have thickly cushioned soles. Thicker sole leads to more massive heel strikes which could lead to injuries. With thinner soles that give you more feel you stride and striking pattern will change and adapt accordingly.

In choosing a barefoot shoe, you should be aware that the more grooves in the sole, the less control the feet has on where the foot goes and how it adapts to the terrain it is moving on. Less, in this case, is way more especially for the barefoot beginner that has just got their new stride pattern sorted.

Most shoes restrict the way the foot moves due partially to the heavy binding and holding of the toes in a set position. This hampers the foot from acting the spring it was designed to be. With forefoot striking and landing allows our feet to perform as a spring.

Our feet have a large number of muscles and connecting tendons. In our feet alone, 18 out of 19 muscles and tendons in the foot attach to the toes. To get strong feet, we need to build strong toes amongst other things.

The natural way the toes grab down is another one of the things that aid in support of the arch of the foot. Wearing shoes especially trainers with the upward pointed toe shoe shape make us rely on the shoe and not on our arches for support. They stop your toes from grabbing down and getting a good feel of the ground, or from your body to be able to support your arches.

Barefoot shoes that allow you to grab the ground and in turn activate and use you arches are the way to go.

Yes, we are meant to be barefoot as I have reiterated. Start slow. I’m sure you have heard this several times now and from other articles. Keep it simple. Super simple.

If you follow these simple steps and check out the other information on site, then you will have all you need.

The number one thing that trips people up (pun intended) is not letting the feet get stronger if you do its a game changer. The other thing is not perfecting the new stride and gait pattern. To learn more about stride and gait paters see my other article here

Enjoy the process and if you have any questions let me know. I live in my barefoot shoes and love them check out one of the ones I love wearing and why in my other post here.